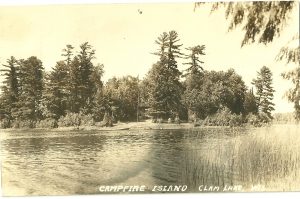 In this last snippet on Camp Fire Island, I am including the cover from the 1914 season brochure for Camp. Pictured is Hazel (Taylor) Scotford, Howard’s wife, with a prize muskie. She was one of the Glidden Glamour Girls of 1908. This brochure tells how to set up arrangements for traveling to the Island and a map of the area at the time, including the train tracks coming from Grandview. This track came in from Grandview down Old Grade Road, M and then to Loretta. You could choose to come into Grandview or Glidden. Coming into Glidden meant an 18 mile ride through the woods via horse driven wagon. If you came via Grandview you could take the railcar over to be dropped off near the Island. The only downside of coming through Grandview was that your luggage may arrive later because the railcar didn’t have much room. There was no village of Clam Lake yet, only a very busy Island. The brochure details the various lakes nearby, cost of licenses and game limits and what to bring on your trip.  There are ads for fishing lures, rods and reels,  fishing line, bug “dope” and even some moccasins.  The sleeping cabins are advertised as being located apart from the kitchen and dining cabin with meals “as good as money can buy so far from civilization”. Howard remarks that the new railroad connections will materially help them have fresh eggs, butter and milk at least five days a week.  A few photos of the cabins and lakes are included. All valuable information for the Northern traveler of 1914. This brochure was printed a century ago by The Enterprise Print of Glidden Wisconsin (the modern day Hart Publishing).  Thanks to Dodo Dumanch for sharing this brochure with me.

Now onto, as they say, “the rest of the story”.

In 1936, Howard Scotford sold Camp Fire Island. He and Hazel ran it until the Depression set in and business declined. They then moved inland where Ralph and Sherri Cornell have a place on the river. Howard Scotford became Clam Lake’s first Postmaster in 1928 and held this post until 1950. At that time his son, Taylor Scotford, took over. Our third Post Master was Dodo Dumanch. She took the job after Taylor left and was our Post Master for 50 years.

As the big lumber companies left Wisconsin what was left behind was land devoid of timber. Worthless in their eyes. This was the time to buy land. The Hines Lumber Company and others were wanting to unload huge tracts of land that they considered useless. Land was selling cheap.

Howard Scotford bought much of the land surrounding the Clam Lake area and handled land sales for the Hines Lumber Company. So, begins another one of his ventures – real estate. Probably many of us can look back at the abstracts to our land and see first the name of Hines Lumber Company and then some mention of Howard Scotford. Through our land many of us will always have a connection to him.

He was one of our founding fathers and brought much to our tiny village. At one point in our history he would have been the owner of the first resort, builder and owner of the first store and our first Post Master  – all at the same time.

When you see Camp Fire Island remember his words, “all hands to Upper Clam!” The Island  is still majestic amid it’s memories.

Howard Scotford died in 1950, before I was born, so I never had the opportunity to know him. Hazel and him were married in the Most Precious Blood Catholic Church in Glidden in 1912 and are buried in that church’s cemetery. I have visited him there. None of the Scotfords returned to Clam Lake. The last to leave was Howard’s youngest child, Taylor Scotford. He left in 1956 and died in 2001. His two elder sisters Eileen and Lorraine preceded him on both accounts. Hazel (Taylor) Scotford spent her elderly years in Glidden with her sister and died in 1978.

Clarence Stuebe, whom worked for Howard Scotford, met his wife Virginia while she and her parents, from Chicago, were staying on Camp Fire Island. They are the parents of Joy (Stuebe) Heinlein and Tom Stuebe that still reside in Clam Lake during the summer months, almost 100 years since their father’s arrival in 1916.

Clarence and Virginia are also the Grandparents of Cher Cofrin whom resides in Clam Lake on the original Stuebe homestead that looks out to Camp Fire Island on Upper Clam.

In the 1940’s Clarence, Alfred and Walter Stuebe raised money to purchase Camp Fire Island and then gifted it to the Federal Government. Due to a fire and time, nothing remains of Camp Fire Island Resort, but, history.